How to talk about Ukraine in the classroom 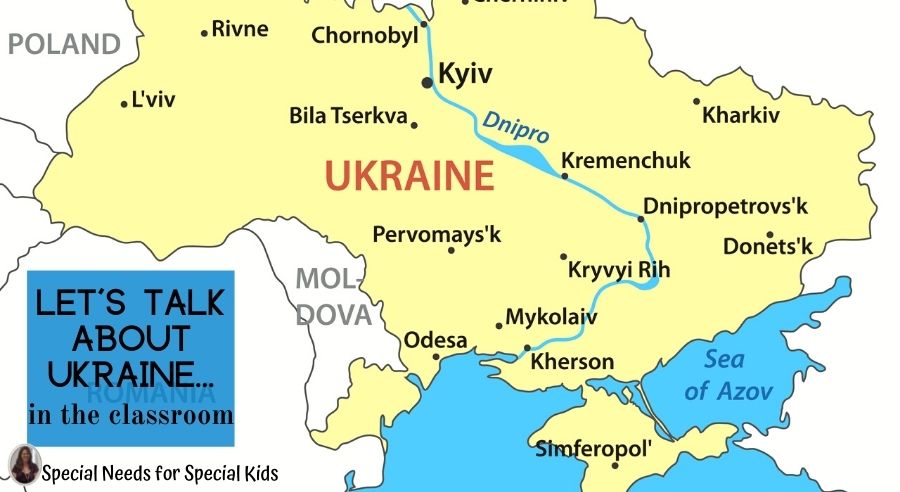 If you are looking for ways to talk about Ukraine in the classroom, then this post will give you some good facts to share as well as a free book you can download at the end to share with your students.

Ukraine has had a long and difficult history. From the very beginning, the physical location of the country combined with its rich natural resources made it a highly desirable country to control. From Vladimir the Great in 988 to the invasion by the Mongols in the 13th century to being invaded by the Lithuanians 100 years later, Ukraine has found itself under the control of many different regimes.

In 1932, Joseph Stalin, the leader of the Soviet Union, wanted more control over the people in Ukraine. He purposefully kept food from entering the country, forcing a famine. Over 5 million people died. Shortly after that, the Nazi army from Germany invaded and another 600,000 Ukrainians were killed.

Ukranian’s tumultuous history is not only filled with invading countries and dictators, in 1986 one of the worst nuclear accidents happened on their soil. A reactor in the nuclear power plant in Chernobyl exploded sending deadly radiation miles up into the air. Almost all of the animals, plants, and people died as a result.

Ukraine finally achieved its dream of freedom when the USSR collapsed in 1991. This makes it one of the youngest countries in the world today.

Ever since Russia lost control of Ukraine, it has looked for ways to pull it back in as one of its own. In 2014, Russia invaded Crimea, a southern part of Ukraine, and took control of this peninsula claiming it was now annexed as part of Russia. Most countries would not recognize this occupation, but Ukraine had its troops and people leave the area

Ukraine is one of the largest countries in Europe, second only to Russia. It is just smaller than the size of Texas. It shares a border with 7 other countries, the largest being Russia.

Most of Ukraine is flat and covered with rich fertile plains called steppes. Agriculture is an important industry for Ukraine. They are the largest exporter of wheat in Europe. They also export more sunflowers than any other European country.

The Dnieper River runs through the country providing hydropower and irrigation to the crops.

There are 44 million people living in Ukraine. The capital is Kyiv, located to the north. The city has many cathedrals, castles, and historical monuments that draw thousands of visitors each year.

The people of Kyiv and the rest of the country have modern-style jobs and live normal, peaceful lives.

The food in Ukraine is dominated by meat and vegetables. A common staple is borsh, a beet soup that has meat and sometimes sour cream. Dumplings, crepes, and pierogis are also popular and often filled with meat, mushrooms, cabbage, and potatoes.

Ukraine’s government is a multi-party democracy very similar to what is present in the United States. There is a president and officials elected by the people in a free and open election process.

As of March 1, 2022, Ukraine and Russia are at war. Russia had been threatening for months to invade the country and claim it as its own. There are have been Russian troops and tanks on the border between Ukraine and Russia during this time.

Ever since becoming independent in 1991, Ukraine has wanted to be part of NATO. They felt this would provide them the protection they needed from future invasion by Russia. And, while NATO agreed, it has not yet taken action to make Ukraine part of this group of protected countries. Therefore, it has stood vulnerable to attack as the Russian forces settled along its border.

In the last week of February 2022, Russia finally invaded Ukraine with its massive army. And although Ukraine is currently fighting to maintain its independence, its army is outnumbered 10 to 1 by Russia.

Other countries have now enforced sanctions against Russia, most of which have been economic. The hope is to starve Russia of its financial stability, encouraging them to retreat.

Will these sanctions work? No one is sure yet.

Will Ukraine be able to fight off the much stronger Russia? No one is sure yet.

Time will tell the story. Meanwhile, the Ukrainian people are fighting to keep what is theirs for as long as they can.

If you would like a free book that covers the information above in a format suitable for students in a middle or high school special education setting, click the button below. Watch for an email to confirm your request, and the book will be emailed to you with a link to access a movie version as well.