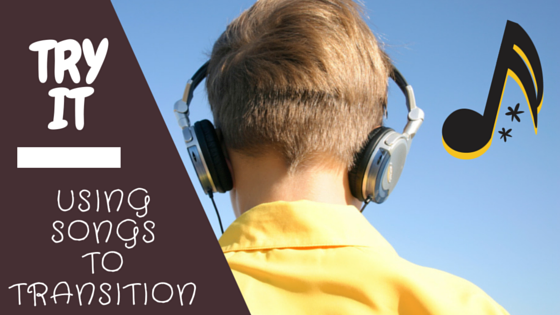 The time we dread as special education teachers:  transitioning from one activity to another, or moving from one location to another.  You have all your students, or small groups, where they are supposed to be, relatively engaged, and then time is up and everyone needs to move.  Ugh!!  Although I destested transition times, I also knew it was probably the most important time of the day.  It was the time I focused on A LOT because as a teacher of little bodies (K-5) who would eventually grow into big bodies, I knew it was my job to teach them how to physically get from point A to point B with as little insanity as possible.  (I hope those secondary teachers who later got my kids, appreciated how well they could transition without a major uproar occurring).  So, what was my secret?  Well, there was no secret or magic bullet, but I did find one thing that helped tremendously…. music.

From the very first day, I would let the students know it was time to transition, usually with a “check schedule” card.  In the beginning, there was A LOT of hand holding and guiding students to their schedule and then to the new location.  About half way through the year, however, many of them could do this on their own, allowing me time to set up.  But, once the kids were at the  new table or center, I would have a song ready to go with some visuals or manipulatives for them to use.  I always used the same song for each lesson.  I always used Number Rock to start math, and I always used I’ve got the Whole Alphabet in my Mouth for reading/writing time.  It may seem like that would get boring for you and me, but for my students, it was the predictability of the music that helped them settle their bodies and get them ready to learn.  I would provide each of them with a number or letter board, and start the song.  In the beginning of the year, when we were still physically helping the students transition, this gave me 2 minutes to set up while my assistant led them through the song.  Later, I could take over that role, freeing up my assistant to get the next lesson or center prepared.

For most of the time I was teaching, I did not have much technology available to me in my classroom, so I simply used a CD player and some CD’s I borrowed from the kindergarten teachers.  That is part of the reason why I made sure to add some visual or manipulative component for all my visual learners. My last year, however, I was lucky enough to get a Smartboard, which enabled us to “watch” the song on youtube rather than just listen and sing along.  Either way, those 2 minutes were long enough to get the wiggles out, but short enough the students would not get bored.

Below, I listed some of my favorite songs we used and the links on youtube.  It really is a great way to start your lesson and easy to do.  Even if you have a severe diversity of learners in your class, and you think there is no way this will work with your crew, try it.  My class was extremely diverse, and I did have one student who took almost 3 years, to get the idea she was supposed to sit still and listen to the song, rather than dance, but it was still time so well spent.  We all learn at our own pace, so why not make it fun?

You get the idea.  As most of you know, you can find ANYTHING on youtube 🙂

Check out my blog post where I go more in-depth with how to use music as a transition strategy. There is also a list of videos to go with almost every topic I cover in my over 700 resources.  Head over to ADDING MUSIC TO YOUR LESSONS TO INCREASE ENGAGEMENT AND RECALL to read more.